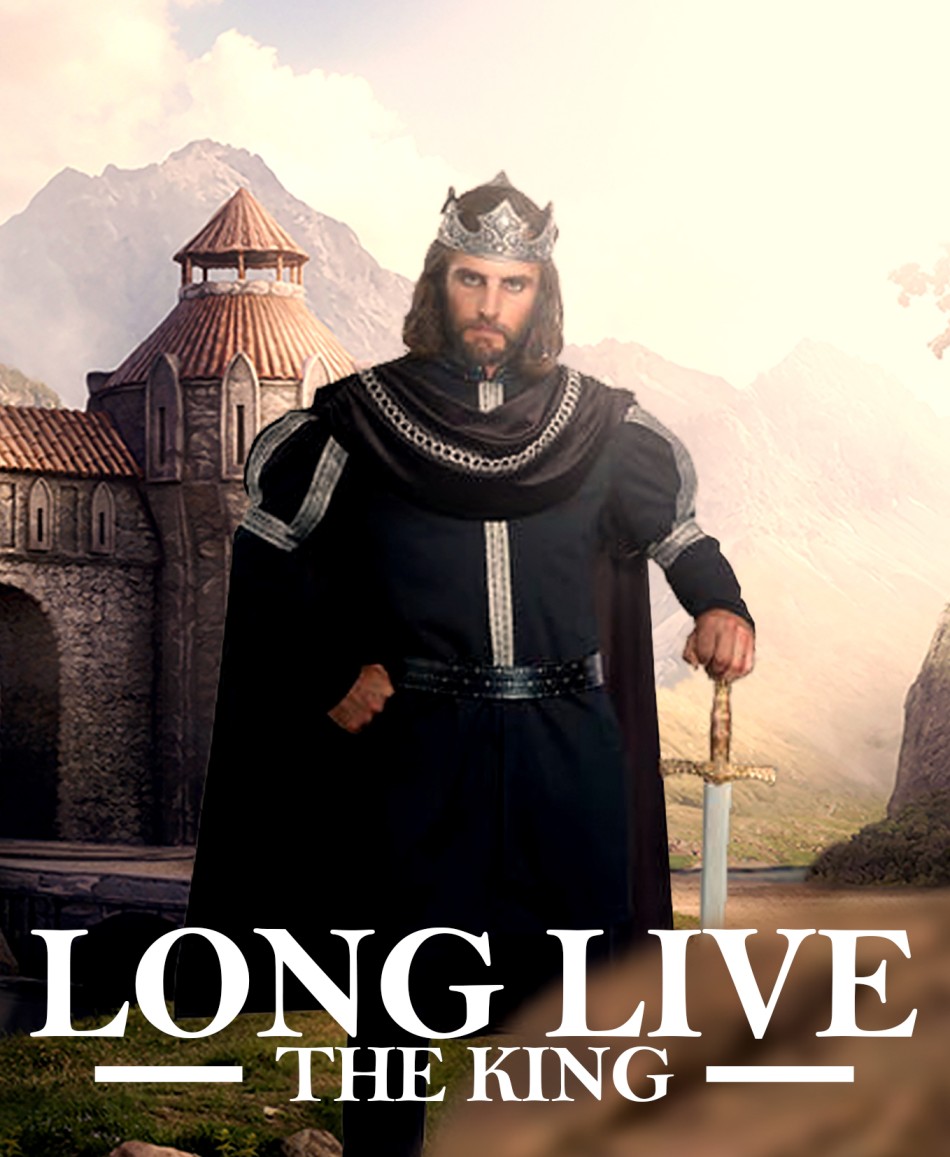 Long Live The King
Candra_en
1371 Chapters
End
English
0
784 views
1 comments
An ordinary student accidentally traveled into another universe and became the king of a small kingdom. He had gotten a “Cheating Code” of life and was able to complete something extraordinary. This is the story about a king that was able to conquer continents and leave behind him an ultimate legend that will be recited between every generation to come.
more
Action Fantasy Adventure Teen
Read Novel
Share :
Chapter 1: I’m the King?

Someone was screaming like a hen which had lost its eggs. Fei heard the noise. He forced open his sleepy eyes and focused on a bright object flying towards him. Fei’s brain slowly identified the object as an arrow, which was hurdling towards him so fast that the air appeared to rip in front of it.

Fei was immediately scared awake, with all the hair on his body standing on its end.

However, the arrow hit him before he was able to react.

The arrow clanged against his helmet.

The arrow had not penetrated but had shook the helmet, disorientating Fei. Fei felt his ears were ringing, the sky and the ground were spinning and stars were circling before his eyes. His body was knocked back, like a Barbie doll blown away by a shotgun.

He cried out in pain as he felt his body ragdoll through the air.

“Andy! Andy!! Why are you still standing there? Go get the priests and mages!”

“Hey! Those son of bitches down there are trying to overtake the castle again!” A soldier pointed at the army dressed in black that surrounded the castle.

Fei heard the commands being shouted and the chaotic footsteps while he was still airborne. He was confused. The king? Mages? Priest? Archers? Siege? Where is this? Is this in the middle of a movie shoot? What the hell is going on?

Immediately, he felt his body collide with the cold stone floor.

His butt made contact with the rock solid ground first before his helmeted head smashed into the wall.

There were more stars dancing before his eyes. As the noises was getting louder and louder around him, his mind was slowly blacking out again.

“What king? Why does it feel like they are talking about me?”

“F--k! Who gives a s--t about kings or queens! You guys better not let me know who shot that arrow, or I’m gonna f-----g kill that guy!” Fei thought vaguely.

His head was almost punctured by an arrow when he had just woken up. He was so scared yet mad at the same time, so he couldn’t help but swear in his mind.

Suddenly, the sensation of pain flooded his entire body. He collapsed on the floor, just like a dog that had eaten a ton of chocolate, choked a couple times and fainted.

Don’t know in how long, Fei woke up for the second time. His head felt sluggish and he could only vaguely perceive his surroundings.

He felt like he was lying on a soft cloud, but as he tried to move, sharp pangs of pain and soreness declared his body’s unwillingness to move. His head was still heavy as if someone had clobbered him with a stick. He couldn’t open his eyes either. All he could gather was two female voices whispering around him.

“Angela, you’re so silly. I wouldn’t care so much about him if I were you. If he dies, you will easily own everything in the Chambord Kingdom and you don’t even have to marry this royal idiot.”

From the crisp voice and sweet giggles, Fei estimated that they were young girls around the age of 15.

“Watch what you are saying!”

Another gentle voice interrupted slight angrily. After a few seconds of pause as if she is adjusting her attitude, she continued. “Emma, my silly little sister, do you know what you are saying? Don’t ever say such things….. After all, Alexander is my fiance!”

“Alexander? Who the heck is Alexander?” Fei thought. He had absolutely no idea of what was going on.

He smelled a little fragrance. The natural sweet body odor of women.

Fei tried hard to open his eyes, and as his heavy eyelids finally budged, he was surprised by what he saw.

He found himself inside what appeared to be a luxury medieval European palace, with magnificent decors, royal furniture and an lavender scent; as if he was in a dream.

He was shocked. He started observing his surroundings after he felt that he had control of his neck again.

Two perfectly postured females appeared in front of him.

The one that was farther away was a young girl dressed in a maid uniform, her blonde hair was simply styled into a pig tail. She pouted her mouth. Clearly, she was unhappy to see him awake.

“She must be the one who didn’t care about the Alexander.” Fei thought, “Although she is young, she is too cold blooded.”

As his sight moved closer, he realized that he was lying on a dark red, gold gilded king sized bed. His head was resting on a soft velvet pillow. A beautiful girl was sitting on the side of the bed with worry written all over her face.

Her silky black hair was like dark cloud tied together with a purple string. Her skin was paler than snow and smoother than ice. The violet tunic skirt elevated her curves, making her appear like a goddess that most men would dream of seeing. She was just perfect

“kokokoko..” Fei coughed intentionally to get their attention.

“You are awake!?”The black haired beauty Angela bent over. Her expression quickly became one of surprise and happiness. “Alexander, how are you feeling? Are you still in pain? Priest Evan said that you have to rest properly…”

He discovered something unbelievable

Angela was using an ancient and weird sounding language. Although Fei was a student in the graduate program at a university that specialized in language, he never heard of this type of speech. However strangely, he doesn’t just understand the language, he can speak it as well.

“Alexander, did you forget? When you were leading the soldiers protecting the kingdom, a sneaky enemy shot you with an arrow. Thank god you were wearing your helmet, or else you might have had to pay a larger price.” Angela explained.

She gently placed her left hand on Fei’s forehead. It wasn’t hot. Surprise flashed through her eyes. “ Great! Your body temperature is back to normal. Priest Evan said that as long as you don’t have a fever, everything will be alright. Alexander, you are a brave king!”

“Me? Alexander? King?” Fei didn’t know what was going on.

“That’s right, our young and brave king of Chambord. It’s all because of you! You appeared on the fortress walls just in time and boosted the morale of our soldiers so they could fend off another wave of attackers from the invading army!” Angela said with a smile on her face.

Fei felt strange. For some reason, he felt like the tonality of the girl was like a kindergarden teacher trying to comfort a crying kid.

Emma, the blonde girl said with a tone of hostility “if it wasn’t for General Bizzer’s repeated request, Alexander will go up there voluntarily? I remember that he almost peed his pants when he was putting on his armor. Boosting morale? If seeing the king got shot off the defense wall like a moron the moment he got up there counts as boosting the morale, then I guess he did.”

Although Fei didn’t know if what Emma said was true or not, he didn’t have time to figure that out.

His mind was messed up.

“What the hell. Didn’t I got smashed by something on the head at the doorstep of my apartment? Then when I woke up, I’m at this Chambord Kingdom that I never heard about and I’m the king Alexander? And this beauty in front of me is my fiancé?

Fei gave himself a few tap on the forehead.

“Is this a prank? Or am I in a different universe?” Fei thought. “This doesn’t seem like a prank. The beauty of Angela is out of this world, who would pay her to prank me? And that Emma is super cute too.”

“Most importantly, I could understand and speak this strange ancient language that I never heard about…” Fei quickly analyzed his situation.

King of the Three Worlds

Sisterhood of Villainess and Heroine