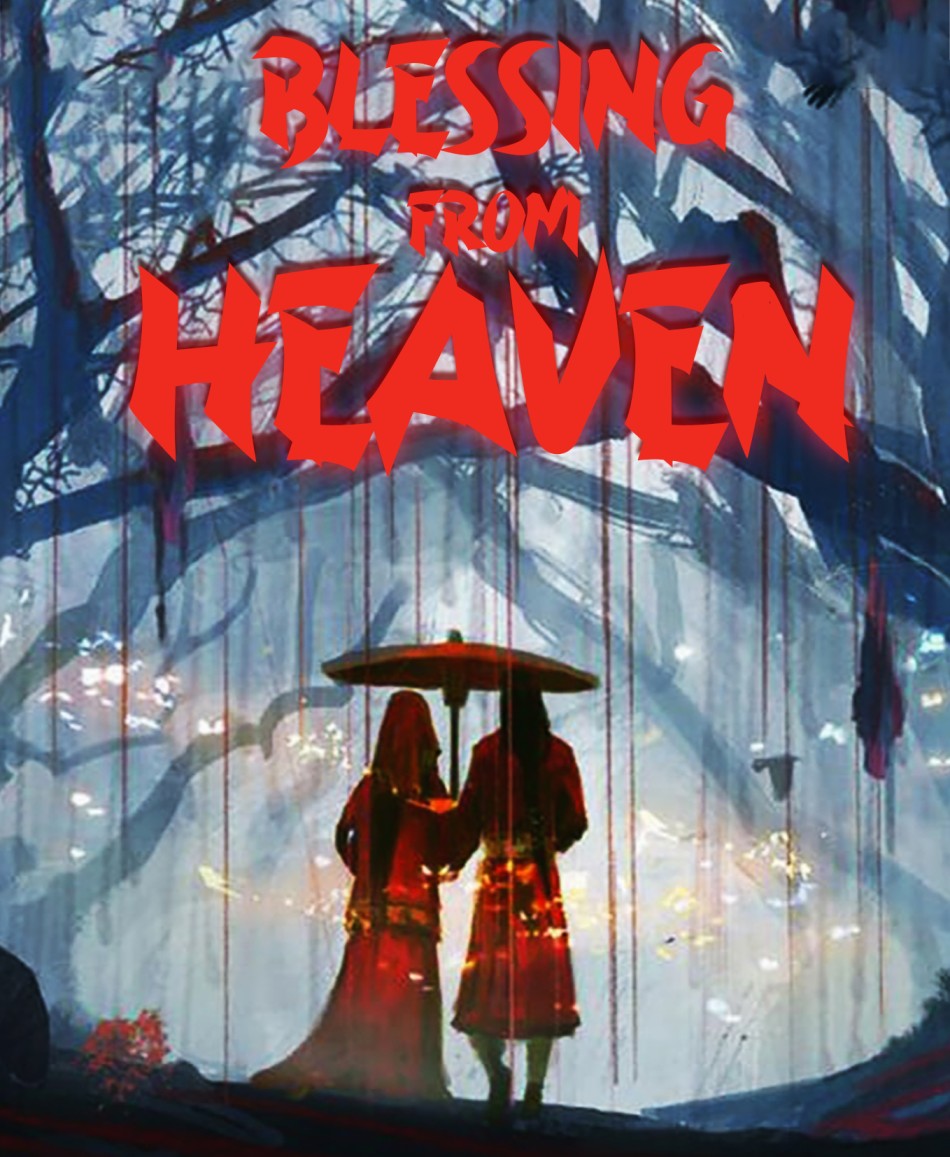 Blessing From Heaven
Nexto
27 Chapters
End
English
5
43.20K views
2 comments
Eight hundred years ago, Xie Lian was the Crown Prince of the Xian Le kingdom. He was loved by his citizens and was considered the darling of the world. He ascended to the Heavens at a young age; however, due to unfortunate circumstances, was quickly banished back to the mortal realm. Years later, he ascends again–only to be banished again a few minutes after his ascension. Now, eight hundred years later, Xie Lian ascends to the Heavens for the third time as the laughing stock among all three realms. On his first task as a god thrice ascended, he meets a mysterious ghost who rules over the ghosts and terrifies the Heavens, yet, unbeknownst to Xie Lian, this ghost king has been paying attention to him for a very, very long time.
more
Action Drama Comedy Romance
Read Novel
Share :
Prologue: Heaven Official’s Blessing

Among all the gods and buddhas of heaven, there was one famous laughingstock of the three realms.

Legends have it that, eight hundred years ago, there was an ancient kingdom in the Midlands called the Kingdom of Xianle.

The Kingdom of Xianle was vast in land and bountiful in resources. There were four treasures within the kingdom: cloud-like beauties, vibrant music and marvelous literature, gold and gems, and their  one infamous crown prince.

What would be the best way to describe this crown prince? Well, he was a unique man.

He was beloved by the king and the queen, extremely doted upon. They would often say: “My son will become a great ruler in the future, his renown will echo through history.”

However, the crown prince wasn’t interested in imperial power or wealth in the common world in the least.

What he was interested in, in his own words, was—— “I will save the common people!”

When he was young, the crown prince focused only on his cultivation, and there were two little stories that were widespread of his path of cultivation.

The first story happened when he was seventeen years old.

That year, a grand Shangyuan 1 Heavenly Ceremonial Procession took place in the Kingdom of Xianle.

Although the custom of conducting these divine ceremonies has since fallen out of fashion for centuries, it is still possible to deduce what a grand occasion of jubilation it must have been from remnants of ancient books and oral tradition.

The wondrous Shangyuan Festival, upon the Great Martial Avenue.

Seas of people gathered on either side of the grand street, there were royals and  nobles  talking  and laughing in merriment atop the high platforms. The glorious royal warriors donned in armour opened the paths while the maidens danced elegantly, their fair hands scattering flowers; who was to say whether the flowers or the maidens were the more beautiful. From within the golden carriage came melodious music that drifted in the air across the entire imperial city, and coming last of the procession was a grand stage pulled by sixteen white horses in golden bridles.

And upon this towering grand stage was the God-Pleasing Warrior, on whom all focused their attention.

At the Heavenly Ceremonial Procession, the God-Pleasing Warrior wore  a  golden  mask.  Donning glamorous attire and with a sacred sword in hand, he played the role of the number one martial god of a thousand years who subdued evil: The Heavenly Martial Emperor, Jun Wu.

However, an accident happened that day.

During the third tour of the procession, it passed by a city wall that was dozens of meters tall. At the time, the martial god upon the grand stage was just about to slay the demon with a strike. It was the climax scene of the performance, both sides of the street were at the height of excitement. The top of the city wall was also swarming with people fighting to watch the show, pushing and shoving each other.

Right then, a small child fell from the edge of the wall.

Screams reached the heavens. Just when everyone thought this small child would stain the Great Martial Avenue with blood, the crown prince looked up, leapt into flight, and caught the boy.

The people  only caught a glimpse  of a white  silhouette that flew like a soaring bird before  the  crown prince already landed with that small child in his arms. The golden mask fell and revealed that young and handsome face behind the mask.

In the next second, cheers erupted.

The people were thrilled and joyous, but the Guoshi 2 of the royal cultivation hall were troubled.

They had never imagined such a huge problem would occur. This was ominous luck! The gravest of misfortunes!

The guoshi were so distraught, they were losing hair as fast as the rain fell. After much contemplation, they called over the crown prince.

They very courteously requested him thus: “Your Highness, might you be willing to face the wall  in reflection for a month? It doesn’t really need to be a month, as long as the intention’s there.”

The crown prince smiled, and replied as such: “No.”

This was how he said it: “Saving people is not anything bad. Why would the heavens convict me for something I’ve done right?”

Uh…but what if the heavens did convict you?

“Then, it’s the heavens who are wrong. Why would I apologize to those who are wrong?” The guoshi could not argue.

This crown prince was thus such a person.

He had never run into anything he couldn’t do, nor had he ever met anyone who didn’t love him. He was the justice of the mortal realm, he was the centre of the world.

So, even though the guoshi were frustrated—“What the hell do you know?!”—it wasn’t their place to say much, and they didn’t dare say too much regardless. His Highness wouldn’t listen either way.

The second story also happened in the year the crown prince was seventeen.

Legends have it that in the south of the Yellow River, there was a bridge called Yinian3 . Upon this bridge, there was a ghost that had been lingering for years.

This ghost was exceedingly fearsome: it was donned in broken armour, the flames  of  karma  burned beneath its feet, and its body was covered in blood and pierced by all manner of sharp weapons. Every step it took, it would leave behind a footprint of blood and fire. Every few years, it would suddenly appear at night and wander back and forth at the head of the bridge, blocking travelers to ask  them  three questions:

The ghost would then devour whoever answered incorrectly. However, no one knew what the correct answers were. As the years went by, this ghost devoured countless travelers.

During his errant wandering, the crown prince caught word of this. So, he went and found Yinian Bridge, guarding it night after night, until finally, one night, he met the haunting ghost.

“This place is the human world.”

However, that ghost replied, “This place is the abyss.”

An auspicious start. The first answer was already incorrect.

“Well, all three answers are going to be wrong anyway,” the crown prince thought. “So why should I wait ‘til you’re done?”

And so he pulled out his weapon and lunged.

This fight was complete chaos. The crown prince was skilled in martial arts, but that ghost was terrifying and dauntless. The one man and the one ghost fought so hard the sun and the moon were toppling. In the

end, the ghost was finally defeated.

After the ghost vanished, the crown prince planted a flowering tree at the head of the bridge. Just then, a cultivator passed by and happened to see him sprinkle a handful of dirt to send the ghost off.

He asked, “What are you doing?”

And thus, the crown prince said the famous words: “Body in abyss, heart in paradise.”

When that cultivator heard, he gave a light smile. He then transformed into a divine warrior donned in white armour, with auspicious clouds beneath his feet, and rode off in wind and holy light. Only then did the crown prince realize that he had accidentally met the Heavenly Martial Emperor, who had personally descended the mortal realm to defeat evil.

All the gods and celestial beings had already noticed this exceedingly outstanding God-Pleasing Warrior when he did that leap during the Shangyuan Heavenly Procession.

So, after this meeting at Yinian Bridge, the deities asked the emperor: “How does my lord find this royal highness?”

The emperor answered: “This child’s future is infinite.”

That night, a celestial phenomenon manifested in the skies above the palace, and storms raged. Amidst the flashes of lightning and the roars of thunder, the crown prince ascended.

To achieve a fruitful cultivation truly was much too difficult. It required talent, training, and chance. It was often a long road of a hundred years in order for a god to be born.

It wasn’t that there weren’t any fortunate souls who became deities at a young age. But, there largely existed those who exhausted themselves for their entire lives and trained for a hundred years, and still there’d be no heavenly calamities4 to dawn upon them. Even if the y did come to face a heavenly calamity, they would die if they couldn’t pass such a trial; even if they didn’t die, they’d be ruined. Their numbers were as numerous as the sands of the Ganges, but most were simply ignorant mortals who would spend their entire lives as nothing more than ordinary, never finding their own paths.

He had always followed the will of the people, and the king and queen loved their son and missed him dearly. So the king ordered for great temples and shrines to be built all across the land, and for the crown prince’s statues to be erected and worshipped by all. The more believers there were, the more temples there’d be, and thus the longer his life and the stronger his spiritual powers. Thus, in a few short years, the Xianle Palace of the Crown Prince became incomparably glorious, and for a time, its prosperity and splendour reached the peak.

The cause of the chaos was tyranny, and rebels rose in revolt. However, while the flames of war were set ablaze all over the mortal world, the deities of the heavenly realm couldn’t easily intervene. Unless it was ghosts, monsters, and demons encroaching on the borders—otherwise, whatever was, was.

Imagine: conflicts were everywhere in the mortal realm, and everyone believed they had reason. So if anyone were to stick a foot in, today you would back your former kingdom, tomorrow another would avenge his descendents. Thus, wouldn’t there be gods who’d want to fight each other all the time and fall into a life of disgrace?

A situation like this for the crown prince meant he must keep his distance. But, he didn’t care at all. He said to the Heavenly Emperor: “I will save the common people.”

The Heavenly Emperor was in possession of a thousand years of divine power, but even he didn’t dare hang those words off his lips. When he heard this, it was easy to imagine how he felt, yet he couldn’t do anything about the crown prince.

So he said, “You can’t save everyone.” “I can,” the crown prince declared.

Thus, he descended to the mortal realm without looking back.

Naturally, the people of Xianle rejoiced. However, ever since ancient times there had been one truth the people had always spoken of in the human world: when gods descended to the mortal realm without permission, there was never a good outcome.

Thus, not only were the flames of war not extinguished, they blazed even wilder.

Reincarnated as The Villainess