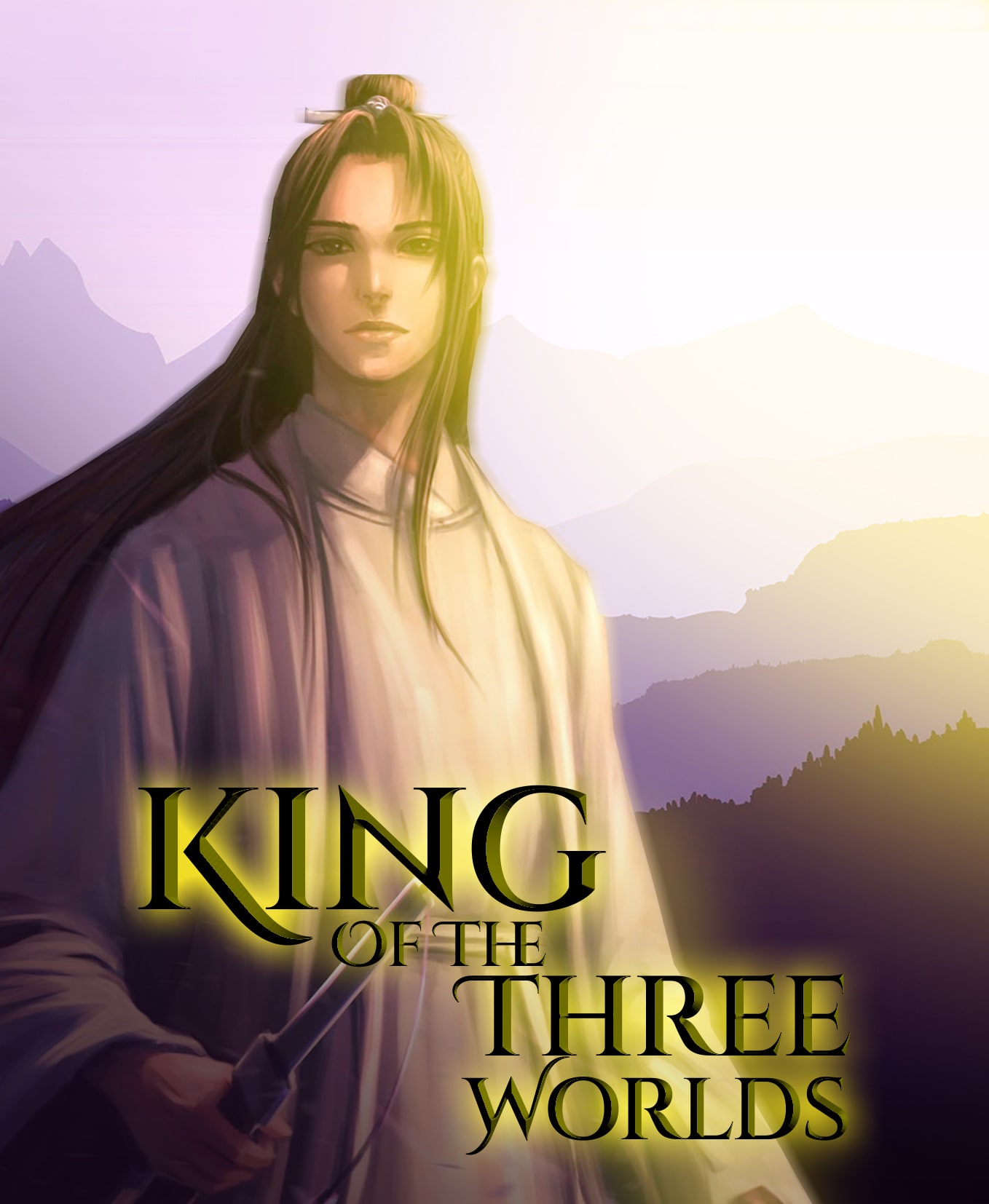 King of the Three Worlds
Candra_en
1425 Chapters
English
0
312 views
0 comments
Heaven has mysteriously collapsed. But wait, Jiang Chen, son of the Heavenly Emperor, unexpectedly reincarnated into the body of a despised young noble, thus embarking on the path of the underdog trouncing all comers. No one has the right to call himself a genius in front of Jiang Chen, as no one has a better understanding of the heavens than the son of the Heavenly Emperor. Genius? He who adheres to me shall ascend, those who oppose me can find solace in hell!
more
Action Martial Art Fantasy Adventure Romance
Read Novel
Share :
Chapter 1: Son of the Celestial Emperor, Reincarnation and Rebirth

Jiang Chen felt like his brains were made of mush – as if he was in a dream, but this felt much more real than that. Every inch of skin, every bone in his body, cried out in agony.

“Am I dead? Am I suffering through the fires of purgatory that lie in hell?”

Jiang Chen’s first instinct was also that he was dead, but that tenuous hint of breath in his body seemed to remind him otherwise – that he was still alive.

After who knew how long, Jiang Chen suddenly forced his eyes open with a struggle, but found himself in a coffin.

“How laughable. I, Jiang Chen, son of the Celestial Emperor, was born with a yin constitution and thus could not practice martial dao. Even when father refined the Sun Moon Pill so that I could enjoy life as long as the heavens exist, I still became father’s burden and succumbed to my death when the cataclysm descended from the heavens….”

“Eh? What’s going on with my meridians? There’s true qi flowing through them?! It’s quite weak… wait! This… this isn’t my body, this is definitely not my body! I was born with a yin constitution, so how could I have true qi present in my body?”

“And, if I was truly dead, how could there be true qi flowing through my body?”

It was as if an electrical jolt passed through Jiang Chen’s brain as he laid in the coffin. At the same time, he realized that the body lying in the coffin didn’t belong to him.

“This… what is this? Whose body is this?” This unexpected discovery brought both surprise and joy to him.

He quickly discovered a few fragments of memory in the body.

“This body’s owner was also named Jiang Chen? The son of the duke of the Jiang Han province in the Eastern Kingdom? The name is right, but this is obviously not me! I am the son of the almighty Celestial Emperor – how did I become the scion of such a mundane kingdom?” Jiang Chen’s mind was filled with questions.

“Did I really die in the cataclysm? Is this the reincarnation referred to in legends? The heavens were shattered and the wheel of life smashed… I should’ve been annihilated in the cataclysm with no hope of traveling along the wheel of life! So this means… I’ve really been reincarnated?” Jiang Chen finally confirmed this new reality after perusing the fragments from the past Jiang Chen’s consciousness.

“To think that I was the exalted son of the Celestial Emperor in my past life, yet was barred from cultivating due to my yin constitution. Yet, now that I’ve reincarnated into the son of the duke of such a humdrum kingdom, I’ve gained the potential to train… Oh the irony!”

“The heavens were shattered and order crumbled… I, Jiang Chen, lived a million years in vain in my past life. Although I died with the sun and moon, I couldn’t offer any help when the cataclysm arrived. A yin constitution cannot train, and thus is doomed to always be at the mercy of others. My fate was like that of a floating speck of dust – easily dispelled as the wind blew.”

Jiang Chen grew somber, lost in his thoughts as he thought of the treatment he’d suffered in his past life, and of his father who had developed the Sun Moon Pill at such a great cost, so that his son’s mortal body could enjoy life as long as the sun and moon’s.

He knew that this life and death separation was possibly an eternal farewell!

Even though he had lived a million years, even though he possessed great intelligence – when he thought of his father the Celestial Emperor painstakingly taking care of him, hot tears still spilled out of his eyes.

He knew, the heavens were shattered. Even if one were as almighty as the Celestial Emperor, it was almost impossible to survive the cataclysm.

Jiang Chen became upset as his thoughts traveled to the end of this path.

However, it was as if a bolt of thunder crashed into his soul when his soul touched upon his body’s meridians. It was like a man dying of thirst finding a sweet spring!

The slowly moving true qi was so weak, weak to the point of almost flickering out. But it was this fragile hint of true qi that stoked his flames of life and swept away those depressing thoughts.

“Practice? Heh, train! This was once a ludicrous thought for someone with a yin constitution like mine. I couldn’t train in my past life, but never acceded to fate. Now that I have gained the potential to train due to reincarnation, is this not an opening that the door of fate has cracked open for me?”

“I was the exalted son of the Celestial Emperor, and held charge of the Tianlang Library for millions of years. I have perused countless books and scrolls. I was familiar with all disciplines and methods of training. I was unparalleled and renowned for the accomplishments in my dao of alchemy, but my knowledge was forever halted and just theoretical; at an abstract level. Now that I have gained the ability to train thanks to reincarnation, what cause have I to fear? For what reason would I, Jiang Chen, bow my head in defeat?” Jiang Chen felt a weight lift off his shoulders as he explored this line of reasoning.

Those negative emotions he had slowly disappeared. He felt that this reincarnation was a turning point that would interminably change his life!

Indeed, from the perspective of Jiang Chen’s past life, the identity of the son of an ordinary noble was completely inconsequential.

But even the lowliest person possessed one quality that he did not in his past life, and that was the qualification to train!

The qualification to train was like the starting line of a race.

Although he was an eminent person in his past life, as lofty as dragons and phoenixes, he could only watch on the sidelines.

Now, despite his commonness in his current life, despite being like an ant, he had the qualification to step up to the starting line and take his place.

The path of training was ceaseless and boundless. As long as one had good fortune, one could transform and become all powerful. Even wings could be stuck onto ants for them to soar in the heavens!

And now, an opportunity had come!

Son of the Celestial Emperor, Keeper of the Tianlang Library. He had devoted his millions years of life almost entirely to studying. It would be no exaggeration to say that he was a walking encyclopedia and grasped the world’s knowledge.

His belly full of theories spanning from the divine heavens to common dirt, there was no topic that Jiang Chen was unfamiliar with.

Although Jiang Chen could not train in the many boring years in his past life, he loved to take in disciples and conduct experiments with them, testing out one theory or another.

He’d lost track of how many prodigies he’d created in his lifetime.

He had reincarnated with the memories of the son of the Celestial Emperor, and had gained the body of the unfortunate dukedom heir Jiang Chen.

Those experiments he had conducted on his disciples could finally now be acted out with his own hands!

Jiang Chen could hardly contain himself.

At this moment, a striking crash sounded, as if something had slipped and cracked.

“Jiang Ying, figure it out! Find out at all costs!” Jiang Feng, the duke of Jiang Han, furiously smashed a vase, almost wishing to burn down the kingdom in his rage.

“Your Lordship, we already have a clue.” Jiang Ying spoke respectfully, dressed from head to toe in black. “Although the young master was not diligent in training, he was still a fighter of the true qi level. His control over his body would be absolute. In the face of such an important occasion, he would not have lost control and passed gas.”

“Then, someone is behind all this? Someone intentionally wanted to embarrass Chen’er during the Rites of Heavenly Worship, so that he would enrage the king and be executed?” Jiang Feng’s tone had descended to a dangerous point.

“The young master ate breakfast with friends at the Autumn Crane this morning. I did not discover anything when I investigated Autumn Crane, but found traces of “Three Laugh Powder” in the young master’s body.”

Jiang Feng’s face darkened, how could he not know “Three Laugh Powder”? This item cleared up a person’s internal passages. While it did not have any side effects, it would cause a person’s qi to sink through their body, and be emitted from all parts of the body.

Appearance of A Wild Boss

Sisterhood of Villainess and Heroine